Donna Hylton speaking at the Women’s March on Washington, Jan. 21, 2017 (Photo: Screenshot)
A leading black feminist and featured speaker at the Women’s March on Washington – who speaks on women’s issues and prison reform – is a convicted murderer and kidnapper who was part of a seven-person gang that abducted, tortured and killed a 62-year-old white man.
Donna Hylton was convicted of second-degree murder and two counts of first-degree kidnapping on March 12, 1986. She had been an accessory in the gruesome murder of Long Island real-estate broker Thomas Vigliarole, whose body was found locked inside a trunk in a Manhattan apartment in 1985. Vigliarole had died of asphyxiation. He was starved, beaten, raped, burned and tortured. Hylton served 27 years at New York’s Bedford Hills Correctional Facility for the crime.
Like the reporting you see here? Sign up for free news alerts from WND.com, America’s independent news network.
In a 1995 feature published in Psychology Today, Jill Neimark described the bloody crime:

The victim was 62-year-old Thomas Vigliarole, a balding real-estate broker cum con man whose partner in crime, Louis Miranda, thought Vigliarole had swindled him out of $139,000 on a mutual con. The two men had sold shares in a New York City condo and meant to pocket the money for themselves, but Miranda hadn’t gotten his share. …
Miranda had hired Woodie George Pace, the kind of man who boasted about putting an electric drill through victims’s hands, to help him. Woodie and a former girlfriend, Selma Price, who became known during the trial as “the fat lady” (she literally weighed almost 500 pounds, and had to be taken away in a special van because she couldn’t fit into a regular car), had been implicated in a similar kidnapping and torture in 1981. “Selma,” recalled detective [William] Spurling, “admitted she sat on the victim and beat him. She was so fat that sitting on him would have been torture enough.”
Ultimately, Miranda would ask for a ransom of over $400,000 – even after the victim had died. He never got it. Maria Talag, who according to Donna called Miranda her godfather, invited Donna [Hylton] and two friends, Rita and Theresa, to participate in the crime. Their cut was to be $9,000 each; Donna wanted hers to pay for a picture portfolio to help her break into modeling. 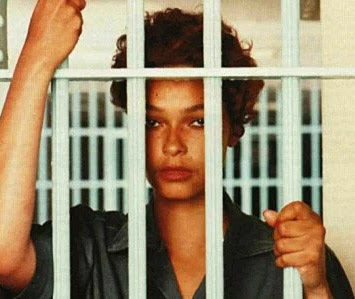 Donna Hylton (Photo: LinkedIn)
Vigliarole had originally believed three girls in the group were prostitutes who would have sex with him. But the girls drugged him and took him to a Harlem apartment that had been prepared for his arrival.
“The closet door had been cut, a pot put in it for use as a toilet, the windows boarded,” Neimark wrote. “For the next 15 to 20 days … the man was starved, burned, beaten, and tortured.”
When Hylton’s friend, Rita, was questioned about sticking a three-foot metal bar up Vigliarole’s  hind end, she reportedly told detective Spurling: “He was a homo anyway. … When I stuck the bar up his rectum he wiggled.”
image: http://www.wnd.com/files/2017/01/Hylton-Steinem.jpg 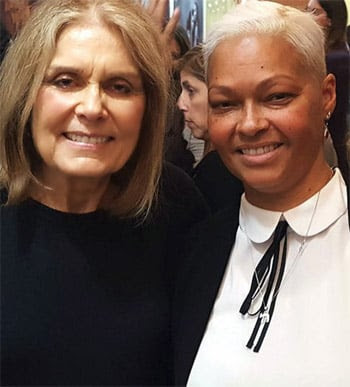 Donna Hylton with feminist Gloria Steinem (Photo: DonnaHylton.com)
Hylton and her two girlfriends took turns watching Vigliarole. Hylton reportedly delivered a ransom note and film to the victim’s friend, who managed to jot down a portion of her license plate number.
Detective Spurling, who interviewed Hylton, recalled: “I couldn’t believe this girl who was so intelligent and nice-looking could be so unemotional about what she was telling me she and her friends had done. They’d squeezed the victim’s testicles with a pair of pliers, beat him, burned him. Actually, I thought the judge’s sentence was lenient. Once a jailbird, always a jailbird.”
In her Psychology Today article, Neimark says Hylton claimed she didn’t know the real-estate broker had died. But then something curious happened during the interview.
“She slipped verbally, and said in an almost irritable way, ‘He [the victim] was going to die anyway, so …’ and then she caught herself. I just looked at her. All her previous protestations that when arrested she’d had no idea Vigliarole was dead were clearly lies.”
Get the hottest, most important news stories on the Internet – delivered FREE to your inbox as soon as they break! Take just 30 seconds and sign up for WND’s Email News Alerts!
Fast-forward 30 years to the Jan. 21 Women’s March on Washington.
image: http://www.wnd.com/files/2017/01/Hylton-Jones.jpg 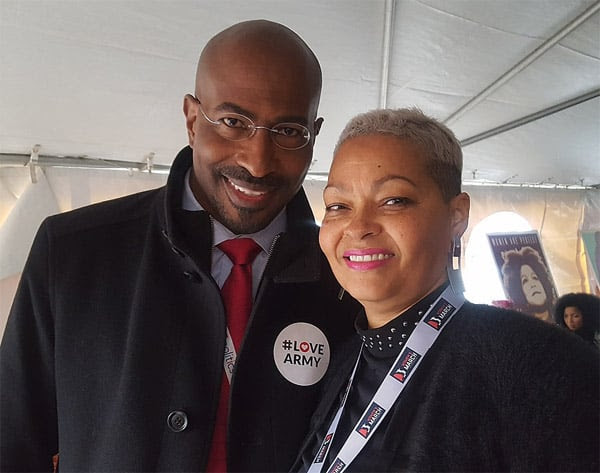 Donna Hylton poses with former President Obama’s green-jobs czar, Van Jones, at the Women’s March on Washington (Photo: DonnaHylton.com)
Hylton joined high-profile speakers at the Women’s March, including Planned Parenthood President Cecile Richards, actress America Ferrera, activist Angela Davis, feminist Gloria Steinem, actresses Ashley Judd and Scarlett Johansson, among others.
“This march is about us, the people, the women in this country who refuse to be marginalized, sexualized and abused and silenced. March!” Hylton shouted to a large crowd as she raised her fist into the air.
Curiously, while Hylton discussed her time in prison at the Washington march, she never provided any details of the crime that landed her behind bars.
She told the crowd:

My name is Donna Hylton. I’m formerly known as inmate 86G0206. But in this moment, in this movement, I’m here to talk about those women and those girls that society refuses to talk about. That they continue to criminalize. That they continue to abuse, sexualize, denigrate and dehumanize. I stand here today to tell you that we are human! That we are women, and we are you, and you are we. And we count.
And who said we couldn’t break the ceiling? This is the glass ceiling right now and from today on, this is our ceiling. How amazing and wonderful it is to be in this powerful movement of sisterhood. And as we march today, we march in solidarity with millions of women and girls who have been told all their lives that they have no rights, they have no value and they have no voice. But today, we in solidarity are marching to change that narrative. We are marching to rewrite, reclaim and re-imagine the humanity that has been taken and stripped from these women and girls. They cannot march with us today, but they’re here.
Five years ago, I was released from prison after serving 27 years. … And when I walked out those gates of prison, I made a promise to those women who are our friends, our neighbors, our sisters that I would do all that I could do to tell their story, to tell their narratives and to tell their truth. So today in solidarity as inmate 86G0206, I call into this moment, into this movement … all of those women who have been overlooked, marginalized, sexualized, dehumanized and silenced. Today we march in solidarity to be their voice. We are their voice.

After the Women’s March, Hylton was interviewed by the Chinese Government Television Network. In that interview, she claimed “black and brown women” are being “criminalized for our color.” Hylton said:

Because I was a woman that spent 27 years in prison and we are the most marginalized of this demographic, right? We continue to be silenced. We continue to be negated. We continue to be villified and dehumanized. It was my purpose today to stand up and to bring us into this moment and say, ‘We’re here, we’re relevant, and you must hear our stories. Our stories are equally important. …
We have always been in this moment. We have always had this problem. It’s not about Trump. It’s not about any one male person. It has been a mindset, a mentality and a behavior that’s been perpetrated forever against women. … If you’re a black or brown woman, you know it’s been happening. The majority of prisons and jails are crowded with black and brown women, because of the dehumanization. We are criminalized for our color. We are criminalized and sexualized.

Posted by William Warrington at 11:08 PM