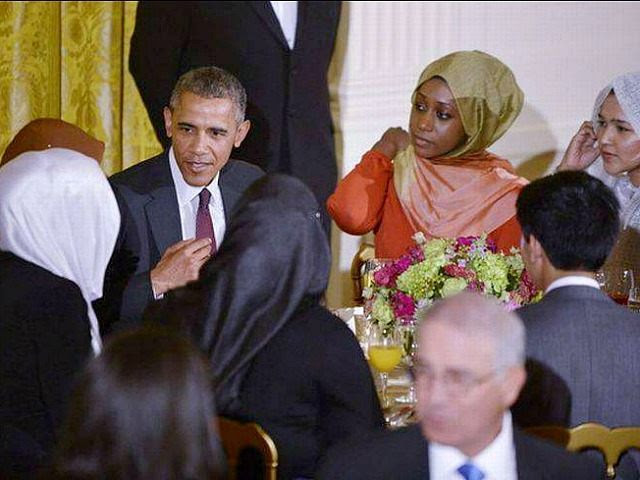 "We are all one family" says Obama during Iftar dinner
Reuters

President Barack Obama hosted two radical anti-Israel activists, Riham Osman and Batoul Abuharb of Houston, Texas, on Tuesday night. They both had the honor of sitting at Mr. Obama’s exclusive “President’s Table” at the annual White House Iftar dinner. Both have publicly stated that they consider Israel and its leadership to be sponsors of terroristic acts.

Riham Osman, seated at the “President’s Table” Tuesday night, is the communications coordinator for the Muslim Public Affairs Council (MPAC), a group founded by members of the Muslim Brotherhood that has challenged the U.S. designation of Hamas and Hezbollah as terrorist groups.
Osman herself has engaged in toxic rhetoric when it comes to the state of Israel.
In March, she described Israel and its Prime Minister Benjamin Netanyahu as sponsors ofterrorism.
On July 28, 2014, during Israel’s defensive war against Palestinian terror group Hamas, Osman claimed that the Jewish state “murdered 1,000 innocent civilians.” The same day, she opined that if “the devil was in human form,” it would “look, speak, and act like Netanyahu.” 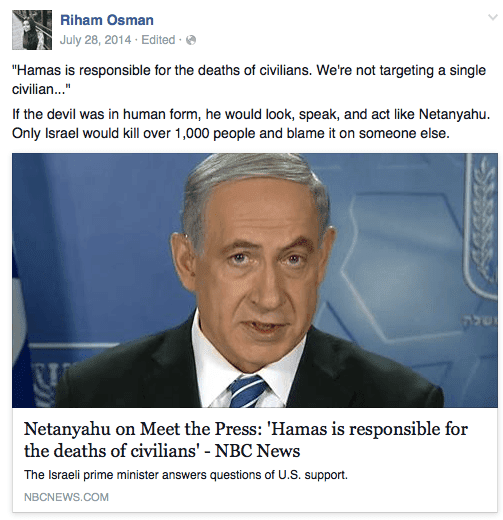 Batoul Abuharb, who was listed as having attended the White House dinner and was seated at the president’s table, has in the past revealed herself as a fierce opponent of Israel.
In the midst of the 2014 war between Israel and Hamas, Abuharb wrote a perfervid article in the Huffington Post titled, “Dispatch from Gaza: Four-Letter Words.”
Abuharb described her “paralyzing fear” in Gaza during Israel’s “military assault,” without bothering to mention that Israel was responding to Hamas rocket fire on Israeli population centers. Abuharb, who lays blame on the “occupation” for the problems in Gaza, not once mentions the existence of Hamas, the militant jihadist group that rules the strip. In another interview, Abuharb described what she witnessed was “true terror” on the part of Israel.
The 2014 war was initiated by Hamas, a Palestinian jihadist group designated as a terrorist organization by the United States. During the war, Hamas employed several guerrilla techniques in gross violation of international law, including using women and children as human shields and storing rockets in UN children’s schools.

Deuteronomy 18 contains the most powerful biblical passage outlining the occult. In verses ten and eleven we find the Nine Forbidden Practices of the occult:

When thou art come into the land which the LORD thy God giveth thee, thou shalt not learn to do after the abominations of those nations. There shall not be found among you any one that maketh his son or his daughter to pass through the fire, or that useth divination, or an observer of times, or an enchanter, or a witch, Or a charmer, or a consulter with familiar spirits, or a wizard, or a necromancer. For all that do these things are an abomination unto the LORD: and because of these abominations the LORD thy God doth drive them out from before thee. Thou shalt be perfect with the LORD thy God. For these nations, which thou shalt possess, hearkened unto observers of times, and unto diviners: but as for thee, the LORD thy God hath not suffered thee so to do.

In my Take A Stand! Seminar “The End-Time Occult Invasion”, I use the following to illustrate how it is absolutely imperative that we avoid all forms of occultism and teach others the same.
The word “abomination” (v.9, 12) is the Hebrew word “Tow`ebah”
(Strong’s number 08441, pronounced “to-ay-baw”)
It means: “a disgusting thing,” “an abomination,” “unclean” (as in idolatry), “wickedness”
This is the strongest condemnatory language used by God in the entire Bible!
Let that sink in. In the strongest terms used in the entire Bible, God condemns and forbids the occult as He warns the Israelites to avoid and abhor it. Pronouncing it as “towebah,” God, in His wisdom, lays out the Nine Forbidden Practices. They are:
1) Human Sacrifice – We call that abortion today!
2) Divination – The Heart of the occult. Manipulation from demonic sources.
3) Astrology – We either trust God or the Zodiac but not both!
4) Enchanter – Someone satanically endowed to produce seductive spells.
5) Witchcraft and Witches – Includes its modern, organized counterpart, Wicca.
6) Charmer – One who manipulates objects or beings via demonic power.
7) Consulter with Familiar Spirits – One who gleans knowledge from demonic contact.
8) Wizards – Practitioners of magical arts
9) Necromancers – Those who claim to be in contact with the dead.
Please note that nine is also the biblical number of Judgment & Rebellion !!!
Once we see and understand God’s standard on the occult, several more Scriptures immediately come to mind that give direction, warning and clarity concerning the various deceptions.
Ephesians 5:10-11 instruct what we must do concerning evil in any form.
Proving what is acceptable unto the Lord. And have no fellowship with the unfruitful works of darkness, but rather reprove them.
II Corinthians 6:14-18 leaves no doubt that God wants His children to steer clear of any fascination or involvement with the occult.

Be ye not unequally yoked together with unbelievers: for what fellowship hath righteousness with unrighteousness? and what communion hath light with darkness? And what concord hath Christ with Belial? or what part hath he that believeth with an infidel? And what agreement hath the temple of God with idols? for ye are the temple of the living God; as God hath said, I will dwell in them, and walk in them; and I will be their God, and they shall be my people. Wherefore come out from among them, and be ye separate, saith the Lord, and touch not the unclean thing; and I will receive you, And will be a Father unto you, and ye shall be my sons and daughters, saith the Lord Almighty.

Deuteronomy 13:1-5 serves as God’s warning to His own that those who endear themselves to false teachings and false teachers (that includes the occult) are indeed “returning to “Egypt” – entering again into satanic bondage!

If there arise among you a prophet, or a dreamer of dreams, and giveth thee a sign or a wonder, And the sign or the wonder come to pass, whereof he spake unto thee, saying, Let us go after other gods, which thou hast not known, and let us serve them; Thou shalt not hearken unto the words of that prophet, or that dreamer of dreams: for the LORD your God proveth you, to know whether ye love the LORD your God with all your heart and with all your soul. Ye shall walk after the LORD your God, and fear him, and keep his commandments, and obey his voice, and ye shall serve him, and cleave unto him. And that prophet, or that dreamer of dreams, shall be put to death; because he hath spoken to turn you away from the LORD your God, which brought you out of the land of Egypt, and redeemed you out of the house of bondage, to thrust thee out of the way which the LORD thy God commanded thee to walk in. So shalt thou put the evil away from the midst of thee.

Notice verse three, which relates that our acceptance or rejection of these false teachers and their works will be a test of our allegiance to God!
No wonder the Scripture very clearly and concisely instructs and warns of God’s will (blessings or judgment) concerning the occult and related issues. Make no mistake: when we fail to reject and expose any and all of the occult practices and various entertainment modes that now endorse them the Bible clearly says that we have failed the test and have commenced to following “other gods.”
Furthermore, Romans 1:32 declares that those who entertain themselves with the images of evil, including the many brands of occult-based entertainment, are under the same judgment and curse as those who actually perform the occult deeds! Wow!

Being filled with all unrighteousness, fornication, wickedness, covetousness, maliciousness; full of envy, murder, debate, deceit, malignity; whisperers, Backbiters, haters of God, despiteful, proud, boasters, inventors of evil things, disobedient to parents, Without understanding, covenantbreakers, without natural affection, implacable, unmerciful: Who knowing the judgment of God, that they which commit such things are worthy of death, not only do the same, but have pleasure in them that do them.

Doesn’t that sound exactly like our culture today; having pleasure in or being entertained by the very things that God condemns?

Many would be content to stay ignorant of the seriousness of the occult in the sight and mind of God. However, to do so is to invite curses and demonic activity to infest our homes, families and land. At very least we cannot expect God to bless and enrich our lives and loved ones if we persist in walking in darkness, making acceptable what He disdains.
Hosea 4:6 speaks to those who walk in ignorance and also to us who know the truth that we must herald it clearly!
My people are destroyed for lack of knowledge: because thou hast rejected knowledge, I will also reject thee, that thou shalt be no priest to me: seeing thou hast forgotten the law of thy God, I will also forget thy children.
It is a sad and tragic fact of these end-days that many in the Church – THE CHURCH – have followed “strange gods” entertaining themselves and their families with movies, books, television programs and more that do nothing more than glorify the Nine Forbidden Practices of the Occult!
Need we wonder why God doesn’t answer our prayers, save our families, anoint our worship services and fill our lives with boldness, power and miraculous authority? We may only need to look as far as the entertainment that many Saints so willingly allow to rob them of not only precious time, but of their sensitivity to God’s Word and standards for His children. As we continually implant Satanic occultism into our minds and lives through “harmless” entertainment venues it won’t be long before we accept what God calls evil as good and reject what He calls good as evil, pridefully becoming wise in our own eyes.
If what I have described here hits a nerve in your life then the good news is that God’s word clearly lays out the remedy. I highly suggest you follow the pattern of the Saints at Ephesus from twenty centuries ago after they heard the Apostles message on this very issue. Acts 19:18-20 reads:

And many that believed came, and confessed, and shewed their deeds. Many of them also which used curious arts (sorcery) brought their books together, and burned them before all men: and they counted the price of them, and found it fifty thousand pieces of silver. So mightily grew the word of God and prevailed. Or “Then the word of God grew and spread in power.”

Free Resources for the growing Christian.

“But grow in grace, and [in] the knowledge of our Lord and Saviour Jesus Christ. To Him [be] glory both now and for ever. Amen.” 2 Peter 3:18
Blue Letter Bible Free Online Bible & Study Tools & Commentaries
Bible Classes College Level For Free to Enroll   Track your progress.
Our Own Free Discipleship Course   In Video HD.
Free Audio Bible Download

Oprah, and The Occult

ONE THOUGHT ON “OCCULT PRACTICES FORBIDDEN”

Posted by William Warrington at 10:43 PM No comments: