IRS: Cheapest Obamacare Plan Will Be $20,000 Per Family

President Barack Obama hugs HHS Secretary Kathleen Sebelius and then-House Speaker Nancy Pelosi after signing the Obamacare law on March 23, 2010. (White House photo/Pete Souza)
(CNSNews.com) – In a final regulation issued Wednesday, the Internal Revenue Service (IRS) assumed that under Obamacare the cheapest health insurance plan available in 2016 for a family will cost $20,000 for the year.
Under Obamacare, Americans will be required to buy health insurance or pay a penalty to the IRS.
The IRS's assumption that the cheapest plan for family will cost $20,000 per year is found in examples the IRS gives to help people understand how to calculate the penalty they will need to pay the government if they do not buy a mandated health plan.
The examples point to families of four and families of five, both of which the IRS expects in its assumptions to pay a minimum of $20,000 per year for a bronze plan.
“The annual national average bronze plan premium for a family of 5 (2 adults, 3 children) is $20,000,” the regulation says.
Bronze will be the lowest tier health-insurance plan available under Obamacare--after Silver, Gold, and Platinum. Under the law, the penalty for not buying health insurance is supposed to be capped at either the annual average Bronze premium, 2.5 percent of taxable income, or $2,085.00 per family in 2016.
In the new final rules published Wednesday, IRS set in law the rules for implementing the penalty Americans must pay if they fail to obey Obamacare's mandate to buy insurance.
To help illustrate these rules, the IRS presented examples of different situations families might find themselves in.
In the examples, the IRS assumes that families of five who are uninsured would need to pay an average of $20,000 per year to purchase a Bronze plan in 2016.
Using the conditions laid out in the regulations, the IRS calculates that a family earning $120,000 per year that did not buy insurance would need to pay a "penalty" (a word the IRS still uses despite the Supreme Court ruling that it is in fact a "tax") of $2,400 in 2016.
For those wondering how clear the IRS's clarifications of this new "penalty" rule are, here is one of the actual examples the IRS gives:
“Example 3. Family without minimum essential coverage.
"(i) In 2016, Taxpayers H and J are married and file a joint return. H and J have three children: K, age 21, L, age 15, and M, age 10. No member of the family has minimum essential coverage for any month in 2016. H and J’s household income is $120,000. H and J’s applicable filing threshold is $24,000. The annual national average bronze plan premium for a family of 5 (2 adults, 3 children) is $20,000.
"(ii) For each month in 2016, under paragraphs (b)(2)(ii) and (b)(2)(iii) of this section, the applicable dollar amount is $2,780 (($695 x 3 adults) + (($695/2) x 2 children)). Under paragraph (b)(2)(i) of this section, the flat dollar amount is $2,085 (the lesser of $2,780 and $2,085 ($695 x 3)). Under paragraph (b)(3) of this section, the excess income amount is $2,400 (($120,000 - $24,000) x 0.025). Therefore, under paragraph (b)(1) of this section, the monthly penalty amount is $200 (the greater of $173.75 ($2,085/12) or $200 ($2,400/12)).
"(iii) The sum of the monthly penalty amounts is $2,400 ($200 x 12). The sum of the monthly national average bronze plan premiums is $20,000 ($20,000/12 x 12). Therefore, under paragraph (a) of this section, the shared responsibility payment imposed on H and J for 2016 is $2,400 (the lesser of $2,400 or $20,000).”
Posted by William Warrington at 5:23 PM No comments:


WHY HAS IRAN ENDORSED YOU?

Rubio comes out against...
Posted by William Warrington at 5:12 PM No comments:

Senator to DefSec Nominee: Why Have the Iranians Endorsed You? | The Weekly Standard

Senator to DefSec Nominee: Why Have the Iranians Endorsed You? | The Weekly Standard

Senator to DefSec Nominee: Why Have the Iranians Endorsed You?

Single PagePrintLarger TextSmaller TextAlerts
Senator Jim Inhofe asked Chuck Hagel why the Iranians had endorsed his nomination for secretary of defense:
"Given that Iran, the people — I’m quoting right now from Iran — people of the Middle East, the Muslim region and North Africa, people of these regions hate America from the bottom of their heart," said Inhofe. "It further said Israel is a cancerous tumor in the heart of the Islamic world. They further said Iran’s warriors are ready and willing to wipe Israel off the map. The question I’d like to ask you, and you can answer for the record if you’d like, why do you think the Iranian foreign ministry so strongly supports your nomination to be the Secretary of Defense?"
Hagel responded, "I have a difficult enough time with American politics, Senator. I have no idea, but thank you. And I’ll be glad to respond further for the record."
Posted by William Warrington at 5:11 PM No comments:

Former President Ronald Reagan's childhood Chicago home to be demolished and turned into parking lot - but could it be for Obama's Presidential Library?

Former President Ronald Reagan's childhood Chicago home to be demolished and turned into parking lot - but could it be for Obama's Presidential Library?: The apartment building where Reagan spent part of his youth has been slated to be turned into a parking lot after the University of Chicago, which may house Obama's library, purchased the property.

Former President Ronald Reagan's childhood Chicago home to be demolished and turned into parking lot - but could it be for Obama's Presidential Library?

By DAILY MAIL REPORTER
PUBLISHED: 11:22 EST, 30 January 2013 | UPDATED: 19:19 EST, 30 January 2013
The Chicago home where the late President Ronald Reagan grew up is slated to be demolished and potentially turned into a parking lot for President Obama's Library, it was revealed today.
The home, at 832 E. 57th Street, was where Reagan survived a near-fatal bout of pneumonia in 1915 and he has written fondly of playing in the Hyde Park neighborhood with his brother and others.
But the University of Chicago has recently purchased the apartment building and they have announced plans to raze it and make it a parking lot. 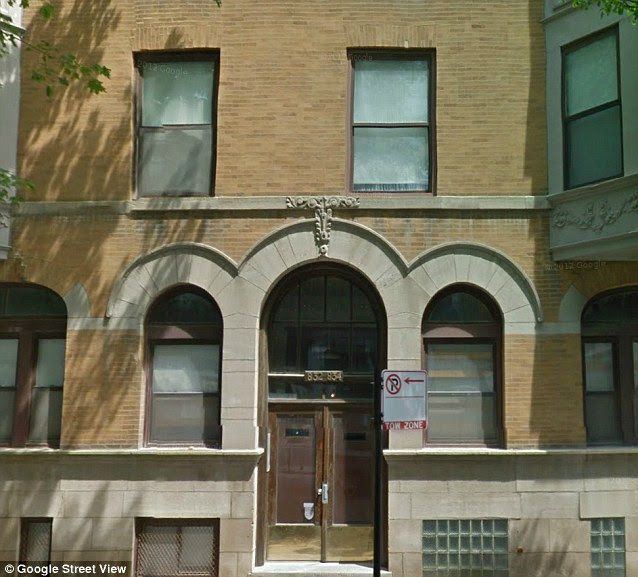 Home of future president: This is the Chicago home where Ronald Reagan grew up and played with his brother and neighbors 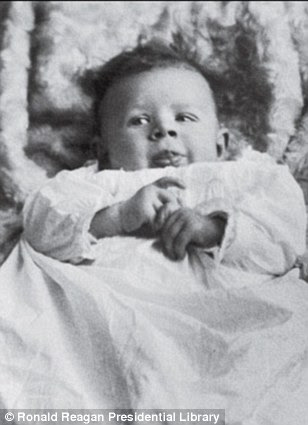 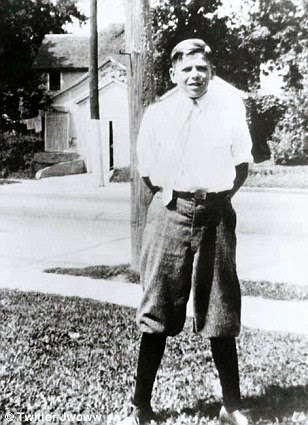 Growing up: Pictures of Reagan as an infant and later as a boy. The future president spent part of his youth in the Hyde Park neighborhood of Chicago
Some have said that the liberal Chicago establishment does not want a reminder that Reagan, a conservative icon, once lived in the city.
Its current mayor, Rahm Emmanuel, was the White House Chief of Staff during Obama's first term.
Hyde Park Historical Society board member Jack Spicer said, 'Whatever you think of Reagan — once the building’s gone, it’s gone forever.' 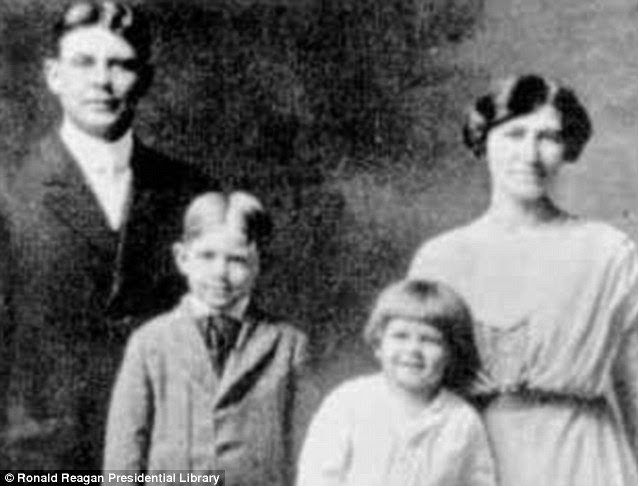 The Reagan family: This undated family photo shows, from left to right, the future president's father, Jack, brother, Neil, Ronald, and his mother Nelle
The elite university has begun aggressively lobbying to become the site for President Obama's future Presidential Library, leaving some to wonder if the parking spaces are being built to accommodate future visitors, the Washington Times reported.
Obama taught Constitutional law at Chicago's law school and his wife, Michelle, and one of his closest advisers, Valerie Jarrett, are former executives at the university as well.
And the site is near Obama's current Chicago residence.

Reagan wrote in 1988 how he remembers looking out the first-floor window of his family's apartment and seeing the horse-drawn firefighters 'come down the street at full gallop . . . the sight made me decide I wanted to be a fireman.'
He also described playing with his neighbors' toys, seeing his brother struck by a beer wagon and how he and his brother ran from the home in a panic after their parents left them home alone to go food shopping, the Chicago Sun-Times reported. 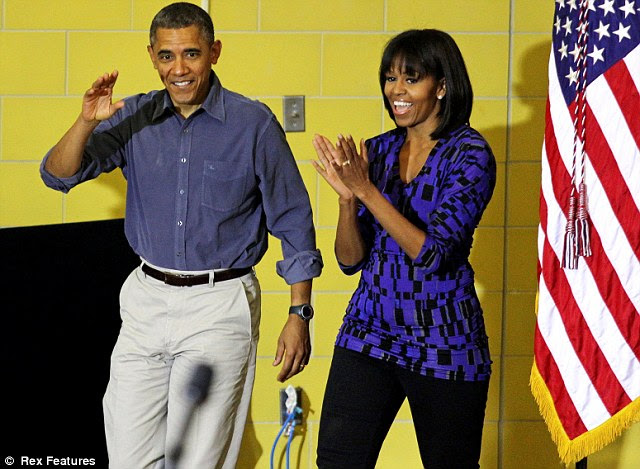 Present tenants: The Obamas live near the former home of Reagan and both have been involved in the University of Chicago, leading some to believe Obama's Presidential Library will be on campus property
Last year, the Commission on Chicago Landmarks denied Reagan’s home landmark status.
University officials have said a plaque alone could suffice in commemorating Reagan's former residence.
White House Press Secretary Jay Carney said in a tweet this evening for those chasing the scoop to ‘stand down.’
‘The report is false,’ he wrote. ‘Shocking, I know.’
Earlier this month, the residence was granted a temporary stay from demolition but as of now construction may begin in about 90 days.
Frank Grabowski, who sold the building to the university, said the official he dealt with knew Reagan had lived there, but 'wasn’t concerned and wanted to pull it down.' 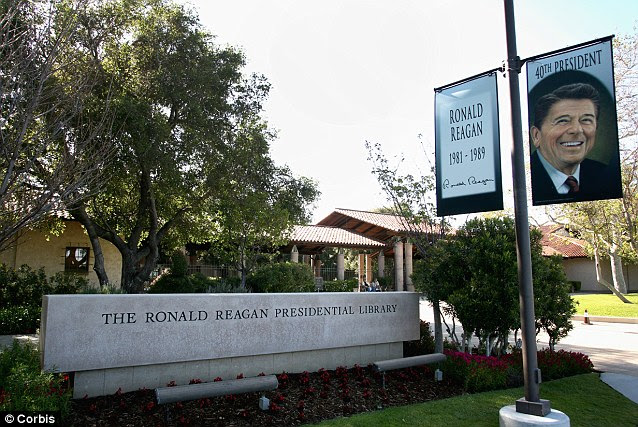 Memorial: The Ronald Reagan Library, located in Simi Valley, CA, it's perched on a 100 acre mountaintop, 100,000 sq feet and 24 different galleries
State Rep. Jerry Mitchell, who chairs the Illinois Reagan Centenary Commission, said destroying the home would be 'a big mistake — if they renovated and advertised it, the university might make more money than they expect.'
Besides potentially using the parking lot for Obama's library, the university is also slated this year to open $700 million, 10-story Hospital Pavilion just a few blocks from the Reagan home.