Historical Perspective on the Balfour Declaration - The Geller Report

Historical Perspective on the Balfour Declaration - The Geller Report

Here is historical context to the Balfour Declaration — the declaration of British government’s support for a Jewish homeland in  the British Mandate of Palestine.

“His Majesty’s Government view with favor the establishment in Palestine of a national home for the Jewish people, and will use their best endeavors to facilitate the achievement of this object, it being clearly understood that nothing shall be done which may prejudice the civil and religious rights of existing non-Jewish communities in Palestine, or the rights and political status enjoyed by Jews in any other country.”

A New Perspective on the Balfour Proclamation
By Lenny Ben-David
The human toll of the Middle East war was horrific.
Disease and famine pandemic. Orphans wandering in the streets. Unspeakable atrocities described only by the bravest critics. No red lines. Emergency deliveries of aid essential.For God’s sake, would at least one person of international stature speak out?

Thankfully, yes, but that was 99 years ago, and his name was Lord Arthur Balfour. No one of his stature today has so proclaimed the need to provide shelter for the millions suffering in Syria under the barrage of Assad’s troops, Iran and Russia.
The Palestinian leadership today threatens to sue Great Britain because of the Balfour Declaration issued in November 1917, which declared, “His Majesty’s government view with favour the establishment in Palestine of a national home for the Jewish people….” 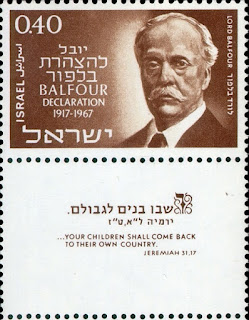 Detractors of Israel held a quackathon in the House of Lords on October 25, 2016, squawking about the declaration’s evil colonialist intentions and demanding an apology. To them, the Balfour Declaration was no birth certificate for the Jewish nation; it was confirmation of a bastard colonial creation. None of the detractors complained about the modern-day Russian and Iranian colonialists or the mass destruction in Aleppo, Homs, Hama and Damascus.
The Balfour Declaration is condemned today by Israel’s detractors and hailed by Israel’s friends as a great historic document establishing the principle of a Jewish state – almost on par in its significance with the Magna Carta, the American Declaration of Independence, or the Emancipation Proclamation. Yes, it deserves its place in the pantheon of Jewish history.
But Balfour’s 120-word declaration must also be seen in the context of the horrifying events in the Levant during World War I. The catastrophes were so crushing that the Jewish leadership in Palestine, Britain and the United States warned about the threatened eradication of the indigenous Jewish community in Palestine. They correctly expressed a sense of urgency.
Many Jews of Jerusalem depended on the chaluka, charity funds that came from Jewish communities in Europe.
With the onset of the war, Turkey prohibited the funding from its enemies.
On August 31, 1914, the American ambassador to Turkey, Henry Morgenthau, sent an urgent telegram to the New York Jewish leaders: “Palestinian Jews facing terrible crisis…. Serious destruction threatens thriving colonies…Support families whose breadwinners have entered army [forced conscription].”
On October 6, 1914, the first of 13 U.S. Navy ships anchored in Jaffa and delivered money, food, medicine and aid to the Jews of Palestine.
The Jews “would have succumbed had not financial help arrived from America,” the Zionist Organization of London reported in 1921. “America was at that time the one country which through its political and financial position was able to save [Jewish] Palestine permanently from going under.”
In December 1914, the Turks expelled 6,000 Jews of Russian origin from Jaffa. With Russia at war with Germany and Turkey, Russian Jews were seen as the enemy. They were evacuated by US Navy ships to Alexandria.
Calamities had befallen the Jews of Palestine almost a year before the massacre of Armenians by the Turks. The Armenian atrocities, begun in April 1915, were witnessed with great trepidation by the Jews of Palestine. Some perceived signs of Turkish preparations to replay the brutal expulsion of Armenians, and some witnessed actual acts of mass murder. In response, several Jews organized the NILI spy ring to assist the British in the war in Palestine.
Ultimately, German commanders in Palestine blocked the Turkish expulsion plans.
A severe locust plague hit Palestine in April 1915. The New York Times reported on April 23, 1915: “Distress in Jerusalem, Many Deaths from Starvation Reported – Plague of Locusts. [Alexandria] – Seventy Jews who arrived yesterday from Jerusalem on an Italian steamer…describe the economic situation as terrible. Flour costs $15 a sack. Potatoes are six times the ordinary price. Sugar and petroleum are unprocurable and money has ceased to circulate. Many deaths from starvation have occurred.”
With major battles taking place in Gaza, on April 6, 1917, the eve of Passover, the Turks ordered the expulsion of approximately 8,000 – 10,000 Jews from Jaffa and Tel Aviv. An estimated 20 percent of the expelled died from hunger and contagious diseases.
On October 31, 1917, Australian light horsemen captured Beersheba, opening the way for Jerusalem’s capture in December 1917. At the major Turkish base in Beersheba, scores of Jewish forced laborers were employed by the Turks in construction, milling, tailoring, railroad work, cutting wood, and as teamsters. They fled as the Australians and British approached. Many others died from disease, flash floods and British aerial attacks.
It was at this point of history that the Balfour Declaration was declared on November 2, 1917. And on December 9, 1917, the British army liberated Jerusalem.
In 1918, even after the liberation, poverty was still crushing.
The first British military governor, Roland Storrs, reported finding “many ladies of doubtful reputation [presumably not all Jewish]… On our entry into Jerusalem we had found no less than 500 such women living in a special quarter.” Thousands of orphans were living in the streets.
For the indigenous Jews of the Holy Land, Arthur Balfour was no less a hero and savior than British commander Edmund Allenby. When Balfour toured the Jewish communities in Palestine in 1925, he was tumultuously received by appreciative throngs of Jews who had survived hardships and punishments of truly biblical proportions.
Whatever the intent, the Balfour Declaration was a humanitarian proclamation as much as a political/diplomatic announcement.
The writer is the author of the forthcoming book US Interests in the Holy Land Revealed in Early Photographs(Urim Publishers). He is now writing World War I in the Holy Land Revealed in Early Photographs. He is director of publications at the Jerusalem Center for Public Affairs.

Posted by William Warrington at 6:52 PM